The Allies - The Collecting Points

One of the first tasks taken on by the MFA&A was to find lost art. In order to safeguard both their legitimate collections from museums as well as their stolen booty, the Nazis had caches of artworks scattered across Europe.  While moving the works of art to secure locations – underground salt mines, caves, tunnels and castles – likely saved them from destruction, the objects were then subjected to other threats.  Upon inspection of these caches it became clear that some items were moved rather hastily and therefore badly packed and subject to damage in the course of transportation and handling. Additionally, a good number of repositories were in remote locations and inadequately guarded thus leaving the door open for opportunistic looters.

Once tallied, MFA&A officers located hundreds of repositories containing thousands of items.  In order to carry out their mission to protect, catalogue, and return these precious cultural objects, the MFA&A officers established collection points all over Germany. Given the vast quantity of items found, the US Army eventually consolidated the objects into four central collecting points – Munich, Wiesbaden, Marburg, and Offenbach. Any objects remaining at the collecting points at the time of their closure were returned to the governments of their respective countries of origin and restitution was to continue through agencies established by those governments.

The largest of all the collecting points, the Munich Central Collecting Point began operating in July 1945 under the command of Lt. Craig Hugh Smyth. Located at the Nazi Party Headquarters and Hitler's former offices, the Munich collecting point housed artworks that came from Bavarian and other museums, private collections, and several Nazi repositories and included Hitler's collection stored in Alt Aussee as well as Göring's collection.  From this collection point, items were returned to their country of origin or private parties in Germany. The Munich Central Collecting Point closed in August 1951.

Wiesbaden Central Collecting Point opened on August 20, 1945 in the facilities of the Wiesbaden Landesmuseum. This collecting point was created primarily as a repository for recovered German-owned objects including many works coming from the Prussian State Museums, the Staedel Institute of Frankfurt, and local museums of Wiesbaden. At the height of operations the collecting point was home to approximately 700,000 objects.  It was closed in August 1951. 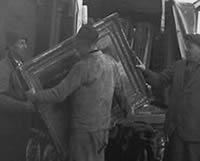 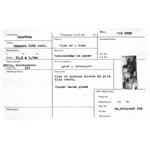 In April 1945, in a copper mine outside of Siegen, Germany, MFA&A officers found a cache of artwork that included works by Rembrandt, Van Gogh, and Rubens as well as an original score of Beethoven's Sixth Symphony. Officers need to secure these items and determined that the Kunsthistorisches Museum and the Staatsarchiv in Marburg, which were relatively unscathed and considered suitable for storage, would be ideal. The first collecting point was then established in Marburg in the spring of 1945. Never a major collecting point, the Marburg Central Collecting Point was closed in June 15, 1946 and its remaining property transferred to Wiesbaden.

Based in a building confiscated from the IG Farben Company, the collecting point at Offenbach was in operation from March 1946 through April 1949. It was established principally for Judaica – books, archives, and ritual objects. In its four years of operation, more than 2.5 million objects passed through the depot the majority of which were restituted.

From these collecting points, Monument Officers inventoried each item and began the arduous task of repatriation and restitution.