Heinrich Himmler and the Police Force under the NSDAP

Born on October 7, 1900 in Bavaria to a devotedly Catholic family, Himmler dropped out of high school at 17 and joined the army.  After the First World War he attended university and studied agriculture.  At this time he also became extremely active in the rightist paramilitary nationalist organizations  that were highly prevalent in Bavaria.  His activism brought him to the attention of Adolf Hitler, who brought Himmler into the inner circle of the NSDAP as a business manager of the party in the early 1920s.

After the failed Beer Hall Putsch, Himmler remained active in the NSDAP taking on several key roles including district leader for Lower and (later) Upper Bavaria and propaganda leader for the entire party for a brief period. In 1929, he was appointed by Hitler to head the Schutzstaffel (SS), Hitler's personal guard.  Himmler grew the SS from a force of 300 men to that of over 50,000.  Though initially the SS was placed under the control of the Sturmabteilung (SA – Brownshirts or Storm Troopers), Himmler established his own secret security force under Reinhard Heydrich (1904-1942) called the Sicherheitsdienst (SD).  During this period Himmler also maneuvered the SS to control a centralized concentration camp system, the first camp having opened at Dachau in 1933. 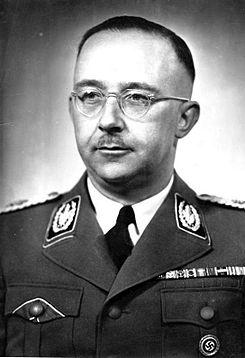 During the 1934 Blood Purge which eliminated the left wing of the Nazi party, Himmler instructed his commandos to massacre those he had privately investigated. The SS was then made into a separate organization.  Two years later, he was put in charge of a unified police system for the Reich as Reichsfuehrer of the SS and leader of the Geheime Staatspolizei, the Gestapo. Himmler eventually combined the Security Police and the SD into a single agency, the Reichssicherheitshauptamt (RSHA), and put Heydrich in command.  It was the RSHA that ultimately implemented the Holocaust.

The police force was one of the first agencies in the Reich to confiscate property from those deemed enemies of the state – Jews, political dissidents, Sinti, Roma and others.  The Law on the Seizure of Assets of Enemies of the People and State of July 14, 1933 served as the primary basis for the wholesale confiscation of property.  Under this law, the state had the authority to seize the property of any person considered seditious even if they were not deported.  In addition, the Law on the Revocation of Naturalization passed on the same day, enabled the state to confiscate property of individuals who were not in the country.  All property was to be used for the benefit of the Reich.

In Austria, the Gestapo established the Verwertungsstelle für jüdisches Umzugsgut der Gestapo or VUGESTA, the Office for the Disposal of the Property of Jewish Emigrants. THE VUGESTA was responsible for selling the confiscated property of refugees usually at public auction for bargain prices.  After deportations began, the VUGESTA also appropriated and sold the property of those victims.

With the passing of the Eleventh Decree to the Reich Citizenship Law of November 25, 1941, the property of Jews deported beyond the borders of the Reich belonged to the Reich in its entirety.  The Gestapo determined whether the conditions for forfeiture were met.  Though Himmler emphasized that no self-enrichment should come from these takings, theft for personal gain did occur throughout the SS.

Himmler reached the height of his power at the beginning of the Second World War having been made Reichskommissar für die Festigung deutschen Volkstums (Reich Commissar for the Consolidation of German Nationhood). A fervent believer in the ideas of racial purity and the creation of a master race, he established the Deutsches Ahnenerbe a research arm of the SS to scientifically support the Nazi doctrine of German superiority. During the war, the Ahnenerbe undertook massive raids looting entire scientific collections of libraries, archival material, archaeological finds, works of art, and the entire contents of museums. However, unlike other Nazi looting mechanisms, it was less regimented, with no clear inventories of what was taken.

Himmler was captured and turned over to the British forces in May 1945 while attempting to flee disguised as a Gestapo officer.  He swallowed a cyanide capsule that was concealed in his mouth while in British custody, and died almost instantly.