Hitler’s appointment as Chancellor of Germany on January 30, 1933 and the formation of his NSDAP government was met with enthusiasm throughout Germany and infamously marked the beginning of the Third Reich and the “legal” concerted persecution of those deemed enemies of Germany – Jews, Communists, capitalists, political dissidents, etc.  The following months saw that everything in Germany, from accounting to zookeeping, was brought under National Socialist control (Gleichschaltung).

The cultural realm was not excluded from strict Nazi regulation and the Reich Chamber of Culture (Reichskulturkammer – RKK) was created to ensure that all forms of artistic creation reflected the Nazi viewpoint.

The RKK was linked to the Ministry for Public Enlightenment and Propaganda headed by Joseph Goebbels and was divided into seven subchambers -- literature, music, films, theater, radio, fine arts, and press. Membership in one of the RKK subchambers was compulsory for those wishing to engage in intellectual pursuits. Though the exclusion of non-Aryans and others deems subversive was not explicitly noted in the acts creating the RKK and its subsequent implementation orders, instructions were handed down requiring a certificate of Aryan descent.

Moreover, every applicant wishing members had to meet the ‘reliability and aptitude” standards. The subchambers were authorized to investigate the activities and political reliability of their members. Needless to say, those not considered acceptable by the Reich were the very people deemed to lack the aptitude and reliability for membership. In addition, power was given to subchambers to prosecute members that transgress Nazi standards or individual who purse their occupation without membership.

Denial of or expulsion from membership was tantamount to the loss of livelihood.  In the realm of fine arts, those not granted licenses to work in the art trade were forced to close their businesses or transfer ownership to an approved member through the process of Aryanization.

The First Regulation of the RKK dated November 1, 1933 was "To promote German culture as responsible to the people and the Reich, to regulate the social and economic relations of the different groups in the cultural professions and to coordinate their aims." 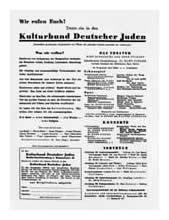 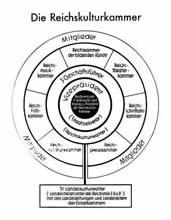