Between 1933 and 1945, tens of thousands of victims of Nazi religious, racial, and political persecution were coerced to sell their businesses, homes, real property, and personal property under duress. In many other cases, property was simply confiscated by the Nazi government.

The Allied forces recognized that acts of dispossession in enemy territory were sanctioned under Nazi laws, and in early January 1943 the Allied governments issued the Inter-Allied Declaration Against Acts of Dispossession Committed in Territories Under Enemy Occupation or Control ("London Declaration").  The Declaration served as a formal warning that the Allies could and eventually would invalidate any transfer of property regardless if such transfer was in the form of "open looting or plunder, or of transactions apparently legal in form, even when they purport to be voluntarily effected."

Though no formal or universally accepted definition of forced sale exists, from World War II until the present it is generally acknowledged that those persecuted by the Nazis were pressured to liquate their property, either under law (as was the case in the Aryanization of the businesses and real property) or as a means to survive. The removal of non-Aryans from German economic life beginning in 1933 with the Law for the Restoration of the Professional Civil Service was followed by numerous other laws that ultimately barred undesirables from all professions and culminated with the Decree for the Elimination of Jews from German Economic Life.  These discriminatory measures eliminated the only means available to non-Aryans and other persecutees to raise funds for paying day-to-day living expenses, the many punitive taxes imposed, and emigration taxes. 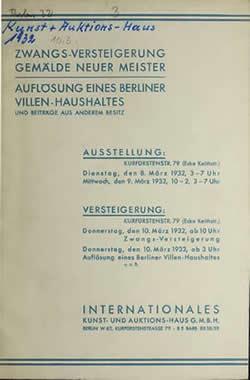 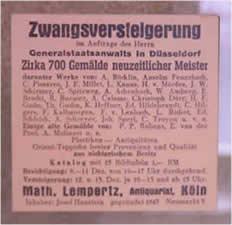 Thus, the only avenue open to Nazi victims to raise capital was to sell what personal property was still in their possession. Eventually limitations were imposed on such sales as well; by December 1938 Jews were forbidden to pawn, sell, or acquire jewels, precious metals, or pearls.  As the sale of property, though seemingly voluntary, was a direct result of Nazi persecution, the loss of the property is deemed to have been forced and the transactions invalidated. Hence a forced sale is akin to theft.