Hitler's appointment as Chancellor of Germany on January 30, 1933 and the formation of his NSDAP government was met with enthusiasm throughout Germany and infamously marked the beginning of the Third Reich and the "legal" concerted persecution of those deemed enemies of Germany – Jews, Communists, capitalists, etc.  The following months saw that everything in Germany, from accounting to zookeeping, was brought under National Socialist control (Gleichschaltung). The cultural realm was not excluded from strict Nazi regulation and the Reich Chamber of Culture (Reichskulturkammer – RKK) was created in September 1933 with Joseph Goebbel at the helm to ensure that all forms of artistic creation reflected the Nazi viewpoint.

In 1936, Adolf Ziegler, a German painter and politician, was appointed as head of the RKdbK.  Then on June 30, 1937, Goebbels empowered Ziegler as part of a six-man commission to travel throughout the Reich confiscating art they deemed dangerous, subversive, or "degenerate."  Nazis abhorred not only the style of these works but the subjects they often depicted (like the decadent scenes from the Weimar Republic by Grosz, Dix, et al). Impressionism, Expressionism, Dadaism, Surrealism, Cubism, Bauhaus, Fauvism, New Objectivity all fell under the aegis of degenerate art.

In his inaugural speech of the Great German Art Exhibition on 18 July 1937 Hitler said, "[a]rt can in no way be a fashion. As little as the character and the blood of our people will change, so much will art have to lose its mortal character and replace it with worthy images expressing the life course of our people in the steadily unfolding growth of its creations.  Cubism, Dadaism, Futurism, Impressionism, etc., have nothing to do with our German people: for these concepts are neither old nor modern, but are only the artifactitious stammerings of men to whom God has denied the grace of a truly artistic talent, and in its place has awarded them the gift of jabbering or deception. I will therefore confess now in this very hour that I have come to the final, inalterable decision to clean house—just as I have done in the domain of political confusion—and from now on rid the German art life of its phrase mongering." 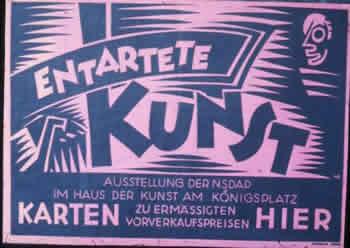 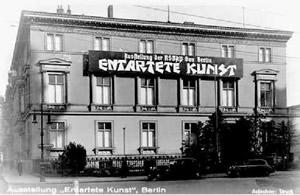 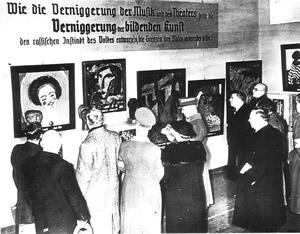 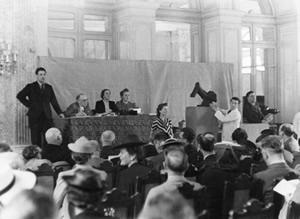 Nearly 16,000 pieces were appropriated culminating in the July 19, 1937 Entartete Kunst Ausstellung – the Degenerate Art Exhibit in Munich (the show then traveled to several other German cities over a four year period). The show was an official condemnation of modern art and included works by Lovis Corinth, Otto Dix, Karl Hofer, and Max Pechstein. Not even artists who were Nazi sympathizers like Emil Nolde, Aryan, or WWI heroes were spared from the purges.

This exhibition was extremely successful drawing in over three million visitors, while a concurrent show of approved Germanic art, consisting of classical landscapes and portraits by Old Masters and works by 19th century German and Austrian artists like Ferdinand George Waldmüller, Franz Defregger, and Carl Spitzweg, attracted less than a quarter of the visitors.

In 1938, a law legalizing the confiscation of degenerate art from state collections without compensation was passed.  Göring, using his skills of persuasion, convinced Goebbels to turn over some of the paintings to him for disposal.  Göring in turn was able to amass a large sum of foreign currency by selling these artworks and used those funds to purchase other pieces for his home at Carinhall.

Thousands of confiscated artworks found their way to the Jeu de Paume Museum in Paris and from there were often sold at auction houses and by private dealers; the most notorious of these sales was the 1939 Galerie Fischer (Lucerne, Switzerland) auction of 126 of these works. With the purge came a flood of highly sought after works of art resulting in a boom for dealers and auction houses. Indeed, art became a form of currency and was used by all to barter for black market goods, such as luxury foods, or in the case of persecutees, exit visas.  The sale of degenerate art lasted through the first few years of the war.