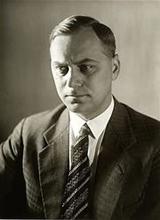 Alfred Rosenberg was born on January 12, 1893 in what is now Estonia to a wealthy Baltic German family. Changed by the Russian Revolution he and his family moved to Germany in 1918 where his hatred for Communism grew alongside his anti-Semitism, firmly believing that the Jews were responsible for the success of the Communist Revolution.

Not long after relocating to Munich he joined the NSDAP and was made editor of the Voelkischer Beobachter, the official Nazi party newspaper, in 1921. In 1929, Rosenberg established the Militant League for German Culture (Kampfbund für deutsche Kultur – KfdK), an association tasked with educating the German public about the connection between cultural and societal decline and promoting authentic expressions of German cultural life.  A year later, Rosenberg published The Myth of the Twentieth Century, a book whose influence on Nazi ideology was second only to Hitler’s Mein Kampf. In his book, Rosenberg interpreted history in terms of race conflict, Aryans vs. Jews -- the Aryan culture is defined by innate moral sensibility and an energetic will to power while the Jewish race corrupted modern culture and produced degenerate modern art, along with moral and social degeneration.

Rosenberg was named head of the Nazi party foreign policy office in 1933 and shortly thereafter he was tasked with training all Nazi party members in National Socialist ideology. Hitler appointed Rosenberg head of the Hohe Schule (the supreme academy for training future German leaders) in 1940 and under the terms of his appointment received sweeping powers in the sphere of book collecting. The Hohe Schule was planned as an international "central institute of National Socialist research, teaching and education” and on its behalf Rosenberg ransacked Jewish libraries throughout Europe.

It was also under this authority that Rosenberg established the Einsatzstab Reichsleiter Rosenberg (ERR). The ERR searched the occupied countries of Europe for cultural goods of value to be transported back to Germany. This gave Rosenberg a free had to sequester all “ownerless Jewish property.”  France was the first country of interest to Rosenberg's looting units. Similar to the albums created for Hitler’s Sonderauftrag Linz, the ERR produced 39 albums entitled Kunsterfassungsaktion Einsatzstab Reichsleiter Rosenburg which contained many of the artworks looted from France.

In December 1941, Rosenberg requested permission from Hitler to take furniture from western homes no longer occupied by Jews, whether the original inhabitants left voluntarily or by force was irrelevant, to furnish the homes in the east which he controlled. On December 31, 1941 the Möbel Aktion or M-Aktion (Operation Furniture) was approved. Through this initiative the homes of tens of thousands of deported persecutees were looted.

After the war Rosenberg was found guilty of conspiracy, crimes against peace, war crimes, and crimes against humanity and sentenced to death. He was hanged on October 16, 1946. 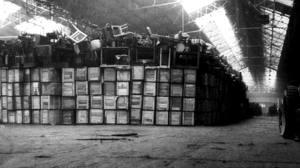 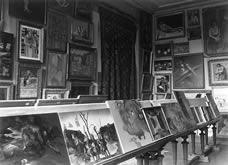