Although the NSDAP supported the notion of private property, all property holders were required to be politically reliable and racially sound.  The property of any owner who did not meet these standards was subject to expropriation. The Aryanization of Jewish firms began in 1933 and at that time was deemed a "voluntary" process. The Nazis used numerous intimidation tactics to entice Jews to sell their businesses – customers were harassed, boycotts were introduced, and public institutions were forbidden to patronize Jewish businesses.  As a result, many Jewish enterprises either went bankrupt or were sold under duress for a fraction of their value. 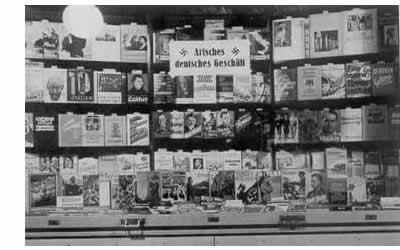 In April 1938, all Jews had to register their domestic and foreign properties and abstain from the purchase or lease of any enterprises.  The reporting included a detailed listing of everything they owned including country estates, land, houses, businesses- and partnerships of all kinds, cash, bank deposits, stocks and bonds, jewelry, valuable pictures and carpets, claims against insurance companies, pensions, authors" rights, patents and annuities, and statements of all debts, mortgages, etc. This mandatory registration of assets enabled the Reich to obtain precise data on the extent of Jewish property which was essential for the Nazis to implement their policy of Aryanizing the German economy.

Aryanization also included the indirect expropriation of the property of Jewish owners in the form of a confiscatory "flight tax" or Reichsfluchtsteuer. Emigrating citizens had to relinquish most of their property to the government before they could leave the country.  Its aim was to punish Jewish or political refugees, deprive them of their property, and thereby reduce the export of German money or goods.

Moreover, all assets had to be deposited in blocked bank accounts.  A confiscatory tax of a billion marks was imposed upon German Jews whose property exceeded 5,000 marks.  The tax rate was 20 per cent, and the tax had to be paid in four installments.  Hence, inventory, liquidation, and confiscatory taxes resulted in the economic extermination of Jews.

After the November 1938 Pogrom (also known as Kriristallnacht) Aryanization was carried out on a more systematic basis and greater scale.  On November 12, 1938, Göring led a meeting on the “Jewish Question” at which he unequivocally stated that the mainly economic Jewish problem must be dealt with from that very angle.  Dissatisfied with the slow pace of removing Jews from the German economy, he set forth an aggressive plan for Aryanizing Jewish businesses.

Under the guise of an ordinary business transaction whereby one individual sold and another purchased a business, the Jews were to be eliminated from the German economy.  After November 1938, Jews were forbidden to do business and had to liquidate their properties under the supervision of a governmental trustee or Treuhänder.  The trustee would arrange for the Jewish owner to receive a nominal payment for the enterprise that was generally paid into a blocked account and then sell the very same business to an Aryan for market value thereby turning a sizeable profit for the Reich.

Gradually, all Jewish property came into the possession of the Reich.  In addition, as the Reich occupied Europe, the treatment of other non-Aryan property was the same as that of Jewish property; the goal was the identical -- to completely Aryanize the Reich economy.