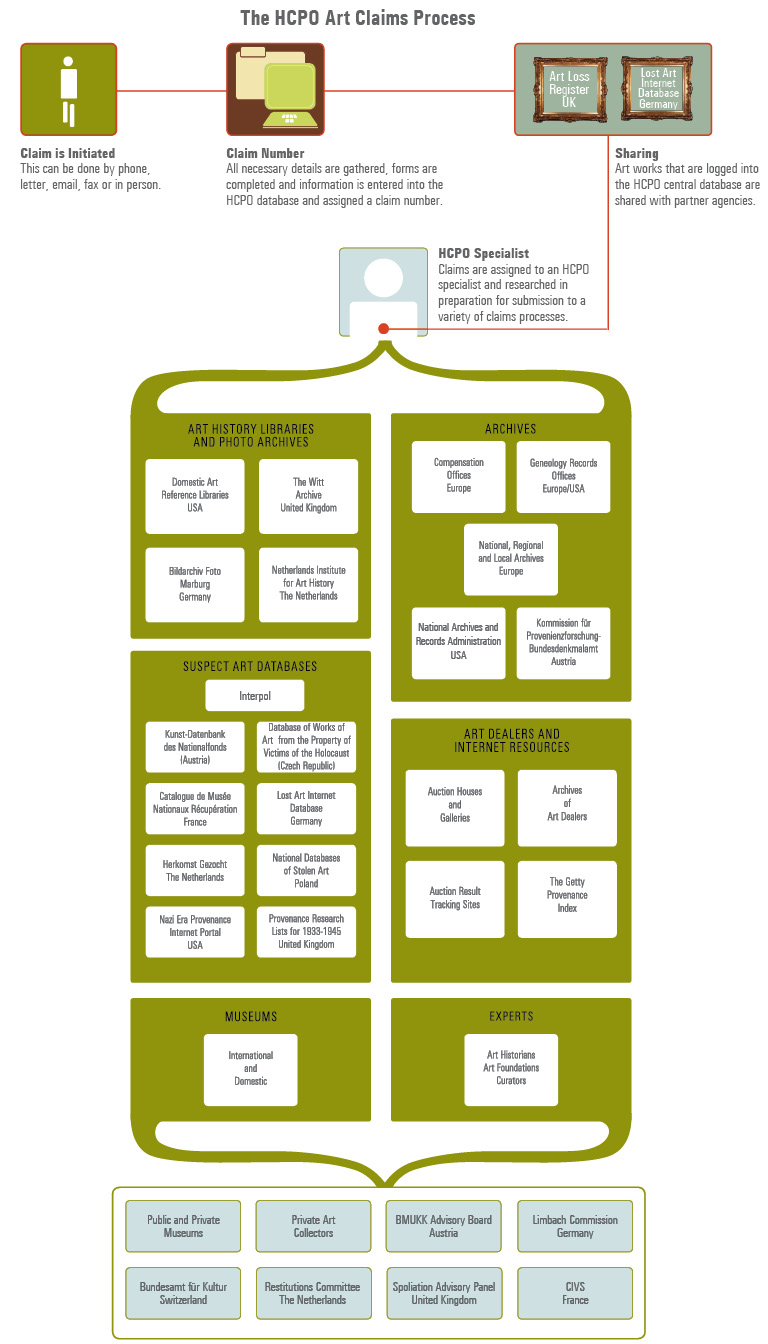 Since its inception the HCPO has responded to over 13,000 inquiries resulting in nearly 10,000 claims from 5,083 individuals from 46 US states, the District of Columbia and 39 countries. Of these, 166 individuals have presented art claims citing thousands of missing objects, including paintings, drawings and Judaica. To date, the combined total of offers extended to HCPO claimants for bank accounts, insurance policies, and other asset losses amounts to over $170 million and has assisted in securing the return of over 100 works of art.

The HCPO has worked directly with almost all restitution and compensation processes in existence today. It is fair to say that, at one point or another since the late 1990s, nearly all roads to restitution and compensation have converged at the HCPO. As a result, the HCPO has close working relationships with archival and historical commissions, financial institutions, trade associations, and its colleagues in federal, state and local governments all over the world. Given the special group of people the HCPO serves, the staff has devoted a lot of time and energy to listening very carefully. Using unique investigative skills, research expertise, and their command of foreign languages, staff members corroborate this information with research in archives, libraries, and other resources.

When property is located the HCPO helps secure suitable documentation of ownership, submits the claim to the appropriate process or entity, and monitors its progress. Unlike claims for financial assets such as bank accounts or insurance policies, claims for Holocaust-era looted art do not lend themselves to wholesale, centralized settlements. Instead, given the individualized nature of these cases, they must be painstakingly resolved on a painting-by-painting or object-by-object basis. We seek to resolve each case in a just, prompt and fair manner relying on moral persuasion and established international principles concerning Nazi-looted art. In negotiating restitution settlements, the HCPO presents current possessors with as much information and documentation as possible. These materials include details about prewar ownership of the missing artwork, persecution during the Nazi era, and of the looting of the artwork. We encourage all parties to seek resolution outside the courts as there are many reasons to avoid litigation. The HCPO facilitates cooperation between parties through open and amicable discussion. Our experience demonstrates that reasoned dialogue between parties can allow for mutually beneficial resolution of these disputes. Over the last decade, the knowledge and expertise of the HCPO staff has alleviated burdens and costs often incurred when individuals pursue claims on their own.