The Nazi use of art was directly linked to their efforts to seize power, conquer Europe and fulfill their anti-Semitic agenda; indeed the Nazi’s turned looting into an official policy. From 1933 to 1945 the Nazi regime carried out the greatest spoliation of works of art in history Nazi plundering, ranging from out-right seizure to sales made under duress.

The extension of the HCPO’s mission in 1998 to include claims for art looted during the World War II era was a natural outgrowth of the HCPO mandate as some bank claims pertain to art stored in safe deposit boxes; similarly, a portion of insurance claims relate to insured art objects stolen during World War II. By accepting art claims, the HCPO has been able to address such banking and insurance claims in their entirety and simplify the claims process for potential claimants. 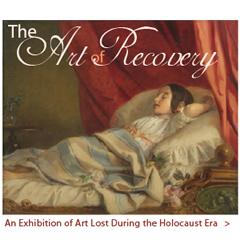 The HCPO assists claimants recover missing artworks, irrespective of the object’s market value. Most of the artworks sought by HCPO claimants are of modest value. Many claimants seek the return of items that may be of great emotional and/or spiritual meaning to them, but of low monetary worth or historical significance. After all, Nazi spoliation was not limited to museum quality pieces but included works by lesser-known artists, decorative arts, and Judaica.

Unlike claims for financial assets such as bank accounts or insurance policies, claims for Holocaust-era looted art do not lend themselves to wholesale, centralized settlements. Instead, given the individualized nature of these cases, they require working with a variety of entities, from museums to private collectors, and must be resolved on a painting-by-painting or object-by-object basis.